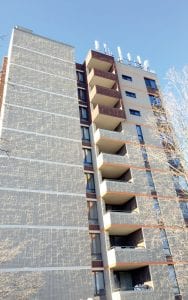 A major renovation project at the Hershey Plaza Apartments – aka “The Hershey Hi-Rise” – has sparked widely divergent reactions among residents, with some expressing appreciation and others outrage.

“I feel as if I have no voice, as if my life means nothing to them. I feel as if I’m being treated as a non-person. With all this money that they’re spending, we are being treated as if we’re the scum of the earth,” said one tenant, who, like others, requested anonymity for fear of reprisals from management.

But other tenants have expressed gratitude for their improved living conditions. One of them said, “I have no complaints about anything here. I have found nothing wrong with current management. Yes, there is chaos, but that’s to be expected in this renovation, which is a total renovation inside and out.”

She requested not to be identified for fear of antagonizing fellow tenants.

The Hershey Plaza is the high-rise building across West Chocolate Avenue from Chipotle. Built in the late 1970s, it houses 216 apartments. Its 200-plus tenants are low-income seniors, or adults with physical or mental disabilities. Almost all the residents receive government subsidies to help cover their rents. It is not an assisted-living facility, so there are no full-time nurses or social workers to help residents cope. 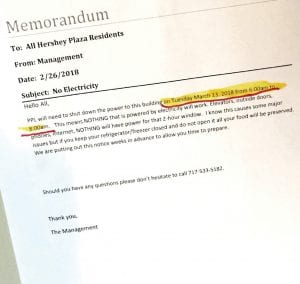 Millennia Housing Management, Ltd. purchased the building May 31, 2017. Millennia realized that the building was in dire need of repair even before the sale, and it began implementing plans for a major renovation project shortly after taking possession. Millennia has invested more than $8 million in the project according to public affairs manager Jeffrey Crossman, who works at the company’s headquarters in Cleveland, Ohio. This includes an overhaul to every apartment and to the building’s interior and exterior.

“We acquire properties that need a little tender loving care, and we turn them around. That’s our expertise,” Crossman said. “We don’t sell them or flip them. Our goal is to provide high-quality housing.”

Crossman added that the 40-year-old building has never had any major capital investments or improvements.

“A full rehab like this usually takes 12 to 18 months,” Crossman said.

He added that the rehab is moving forward as expected, and that the renovations should be completed this coming summer. But he emphasized that construction is notoriously difficult to predict because Millennia is working with many subcontractors.

Residents of the 77 apartments, which have already been upgraded, have generally welcomed the improvements. One resident showed me her apartment, with its recently remodeled bathroom and kitchen. Her living space looked quite comfortable, and she expressed complete satisfaction with her unit.

But the renovation project has literally given other residents nightmares. Two tenants said that a few months after the sale, management held a meeting to tell residents that they had a great new Christian benefactor who was extremely wealthy, and who would raise living standards. They came away with the impression that the renovation would go quickly. According to these residents, the meeting initiated an endless stream of unkept promises.

Management told one tenant that the work on her apartment would take approximately five days. She has been waiting five months for the work to be completed.

“In the meantime, we have been living in storage units,” said another resident, pointing out that management instructed residents to pack up their belongings to move to another apartment so their unit could be renovated.

Then days, weeks, and months would roll by with little or no action on the apartments.

“They say they’ll be here at a certain time, and then they don’t show up,” one tenant said.

“There’s no rhyme or reason to how they do the work. There’s no pattern, it’s just random. They ripped up the carpet and flooring and they just disappeared,” another occupant said.

The floor was eventually completed months later, but the baseboards, bathroom and bedroom remain unfinished.

Making matters worse, according to some residents, building managers have often been unresponsive to the tenants who are living in a state of limbo, sometimes because the managers themselves don’t seem to know what’s going on.

Speaking of an on-site manager, one resident said, “When he sees you coming toward him to ask a question, he beelines in the opposite direction.”

But another tenant says that whenever she contacts management with a maintenance problem, someone is often there within an hour, and usually the same day. She says the maintenance men are very kind and generous.

Crossman says, “(Millennia) tries to work with residents to minimize the disruption as much as possible, understanding, of course, that construction inherently involves some disruption.”

But he added that the company needs to do better if tenants are being given inaccurate information about the timing of their renovations.

Many of the problems stem from the difficulty of coordinating the schedules of numerous subcontractors. Any renewal project of this magnitude will inevitably produce stress for elderly residents and people with physical and mental challenges. Residents speak about an unbelievable noise level as workmen hammer away at walls as early as 8:30 a.m. They talk about overtaxed elevators. And they have complained about water being shut off during daytime hours. But many of these problems probably could not have been avoided.

‘Not a Lunatic Asylum’

If there is one thing all tenants agree upon, it’s vehemently disputing the perception that the building is plagued with criminals and people with severe behavioral problems. As one resident emphasized, “(the Plaza) is not a lunatic asylum.”

Several tenants told me that they want people to understand that most Plaza residents have lived normal lives. They raised families, worked respectable jobs, and paid taxes over many decades to support others in need.

And even the people with mental disabilities do not pose a threat to other tenants or the surrounding community.

“This building is full of people in need of social services, and a lot of them are mentally challenged, but I don’t think anyone is any danger from these people,” one tenant said.

Still, many residents are desperate for the renovations to be completed, more direct communication from management, and accurate timetables for work orders.

“Maybe it will be fabulous…if I live long enough,” one resident said. “They have to eventually get it done, but it’s taking so much longer to do these apartment units.”

Crossman concluded, “I recognize that people are living amidst construction and it gets frustrating after several months. But we do ask for people to be patient because we’re getting close to the end. The units will be nice, the building is going to be wonderful, and it’s going to be a much-improved place to live.”